The End of All Projects, or: Taking Agile to the Next Level

Imagine a world without projects, project leaders and product owners. Imagine a broader product definition, a larger backlog and multiple feature teams all working on the same effort. In this article, ti&m's CTO Martin Fabini explores an organizational design based on LeSS, the framework for scaling agile software development to multiple teams.

Let me share some ideas to reduce dependencies and management overhead in software development as it gets addressed by the Large Scale Scrum (LeSS) framework. LeSS promises scaled agility in software product development – not through a prescribed remedy, but by refocusing on Agile principles to put the “teeth of Agile” back into software development. This may sound boring and obsolete, but as I can confirm, the more Agile goes mainstream, the more the principles of Agile get diluted.

I want to shift your attention to the organizational design of a scaled Agile environment, as it is discussed within the LeSS framework. The key points are:

Sounds too good to be true? Let’s take a closer look at some typical implementations of Agile. Here is an example of an organization with three Scrum teams working on three projects: 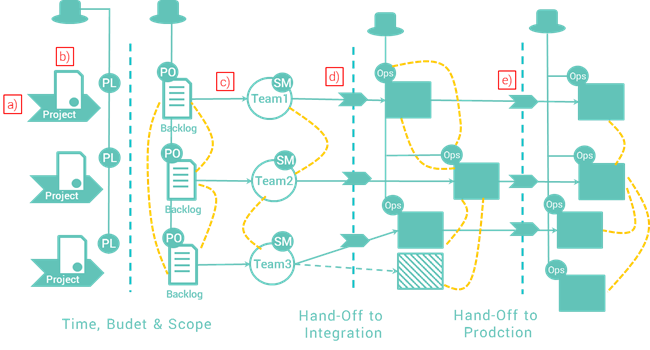 Huh – looks complicated but familiar? The basic pattern of the organizational design is the “copy-pasting” of Scrum teams wrapped into a project structure. One Scrum team was successful, thus you start another one, and so on. In short, you start duplicating a lot of unnecessary things, which is a direct result of Scrum not addressing the scaling issues. The typical flow to change a piece of software might be the following:

Let’s look at the same organization after implementing feature teams and DevOps according to the LeSS framework: 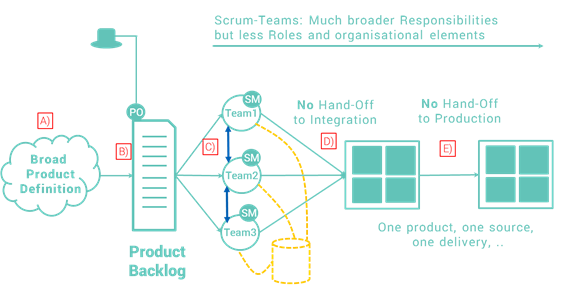 Now, which benefits might you expect from such an organizational design? Firstly, there are no projects. It might be hard to imagine a world without projects, but give this thought a chance: Right at the moment when you get the green light for your project, your focus is on delivering what is in the contract of said project. This is your definition of success and you stick to it until the project is done. With a broader product definition, and thus a larger backlog where several teams are involved, you focus and prioritize on user stories and – if done right – on the VALUE of each story. It can be viewed as a flexible program management, implemented in a big backlog. If the value is justified, all the teams may also work on just one component at the same time, even just for a few weeks. As a consequence, the organization has more flexibility and the capability to deliver more value in a shorter amount of time. Projects with their “contract thinking” put the focus on just one aspect or component, which means that you are trapped optimizing software development locally.

Secondly, LeSS means a dramatically reduced management overhead. There are less product owners, no project leaders and operations are transformed to resemble a software team, which provides the right self-service tools for developers.

Thirdly, priorities drive the effort. The product backlog determines where the effort and the money goes. This may change quickly, which is also the cornerstone of Agile and a reason why projects hinder scaled agility.

And last but not least, since there is a regular release planned every two weeks, there is no need for developers to work on feature- or bug branches. It is very rare that bug fixes can’t wait two weeks for delivery.

Of course, many questions are still open. But if you made it to the last line, I have probably caught your interest. If you want to learn more about implementations of “LeSS”, contact me, come to one our free meetup sessions or look into a LeSS training in Zurich.

Mehr erfahren
More with LeSS: An Interview with Cesario Ramos

Have you heard of the Large Scale Scrum (LeSS) framework, but aren't entirely sure what it is? Are you a Scrum Master who wants to take his knowledge of one-team Scrum to the next level and learn about scaling agile development to multiple teams? Cesario Ramos, Lean & Agile coach as well as certified LeSS trainer, shares his knowledge in an interview.